Back when I was a kid, before television and as my son (Greg) says, "When everything was in black and white", I fed my imagination by listening to adventure shows on the radio. We had a big refrigerator sized Zenith combination AM and shortwave radio. It had a huge dial with a large ornate pointer about 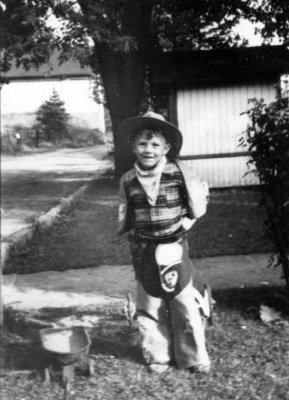 6 inches long tipped with a golden ring and arrow pointer, that I can still see in my mind’s eye just as if it were yesterday. I used to sit in front of it every night and listen to a number of regular programs.

My favorites were mostly westerns – Gene Autry, The Lone Ranger, and Straight Arrow. One of the best was "Sergeant Preston of the Yukon", a weekly tale of a Royal Canadian Mounty in the far north. I was enthralled with the stories of trappers out in the wilds collecting pelts to trade for gold. When I went to Doodles to get my hair cut (I did have hair once believe it or not), I’d wait my turn by reading through the old dog-eared copies of Outdoor Life. Other than the articles for catching the illusive Golden Trout or fly-fishing for tarpon or bonefish, I liked to look over the ads in the back for traps, scents, and other items associated with trapping. My neighbor, Butch, the caretaker of 100 Springs as well as being one of the worlds greatest story tellers, world’s greatest fisherman, Handsomest Bald headed Guy on the planet, etc., etc. was also a trapper. On the northern side of our garden, there were a couple of old chicken coops. The one in the back was one of several of Butch’s 100 Springs inner-sanctums. If he were feeling especially kindly and if you were incredibly lucky, you might just possibly be permitted to enter these holy of holies. There he kept all his traps, stretching boards, and a variety of mink, muskrat, and fox pelts and other gear such that any boy standing in their midst would think he had died and gone to heaven.

Every fall Butch would prepare his traps for the upcoming season. This entailed boiling them in a barrel of water full of walnut fruits. There were several walnut trees near the chicken coops, and every summer they grew prodigious quantities of green, apple sized fruits with a walnut inside. If boiled, this made a sour foul-smelling brew, blacker than the darkest roast of Colombian coffee made by Starbucks. hat this treatment did was remove the "Human" smell from the traps. This was absolutely necessary in order to be a successful trapper and it was Butch’s own special recipe.

While he was treating his traps, I would stand by and listen to his tales and learn how and where to set a trap. Every now and then he would take me out when he checked his traps, and show me how to set the bait or show me how to hide a trap along a trail or where the muskrats had their burrows.

It was heady stuff for a kid, and it wasn’t long until I bought several traps, got a subscription to Fur, Fish, and Game and set about running my own trapline with visions of easy money just over the horizon. If I close my eyes I can feel the cold steel of the traps, and remember how I would have to strain to close the metal springs to set the trap. I recall the "Snap!" they would make when you would spring them with a stick.

It was in the dead of winter that I began my adventure as a trapper. Every day I would get up before sunrise and set out before breakfast and long before I had to catch the school bus and go up into the woods behind the 100 Springs dam to check my traps. I was a singularly awful trapper and morning after morning, I would trudge through the snow shining my light on where my traps were hidden, only to find that my traps had been undisturbed during the night.

One morning, I made my way following the old road to where I had set one of my traps at the side of one of the many springs for which 100 Springs was known. Instead of the usual undisturbed snow, my light was reflected back by two bright diamonds in the dark, which then resolved into the two bright eyes of an enormous raccoon caught in my trap.

Now, in Sergeant Preston adventures and in my imagination, the trapped animal either chews off his own leg to escape or instantly lays down and politely dies in order to be turned into instant cash. My victim, however as I drew nearer, was apparently very much alive. Well, he was more than just alive - he was mightily pissed. He was straining at the trap’s chain trying to get within reach in order to sink his teeth into me. This wasn’t really what I had envisioned at all, and I didn’t know what to do. I decided to ask my mentor, Butch, for advice and I ran back as fast as I could.

I found Butch seated at his kitchen table enjoying a cup of coffee. "Reverend Peters", what can I do for you" greeted me as I entered the warm kitchen. I breathlessly related the story of the raccoon in my trap and asked him what I should do. With a twinkle in his eye, he told me that I should go get my baseball bat and go and give the raccoon a couple of good whacks on the head. "That should take care of it.", he stated.

Looking back across the gulf of time, I can see myself through his eyes standing there. He must have really been enjoying it. Well, I ran and got my old Louisville Slugger and as I headed back up beyond the dam, I had the faith like Moses with his staff at the Red Sea that all my problems were over.

I crawled down over the bank and cautiously approached the raccoon, which watched me warily as I approached. I screwed up my courage and raised the bat over my head and brought it down on the raccoon’s head as hard as I could. If I thought that it was pissed before, my blow transformed him into a grizzly bear and I was mighty glad that the stake holding the trap’s chain was securely anchored. Holding back tears, I ran back again to get Butch’s advice.

I don’t think Butch was too surprised to see me back so soon. He could tell that it hadn’t gone well from my obvious distress. Finishing his coffee, he got up and got his coat and went out with me to deal with the situation.

Butch killed the raccoon for me and I felt awful as the life went from its eyes. Later Butch showed me how to skin it. I stretched the skin and hung it on the wall down in the cellar. Raccoon’s weren’t worth much so, I thought maybe I could make it into a Daniel Boone hat (This was before Davie Crockett’s coonskin hat gained national attention).

This incident made me realize that the romance of trapping as epitomized by "Sergeant Preston" was quite different from its reality. It wasn’t long before my traps were hanging in the cellar alongside the coonskin. It hung down there for a couple of years and after a while, patches of fur began to fall off and insects chewed holes in it. Everytime I looked at it I felt a pang of guilt. Finally it became too decrepit to keep any longer and I threw it away. The memory is all that remains.